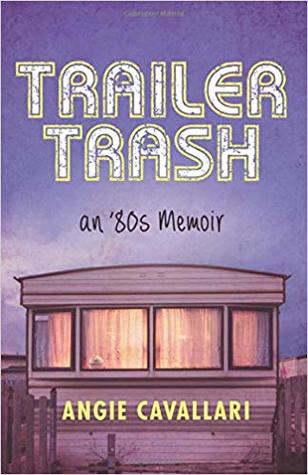 “My Mother hated being cold.”  This is the opening line of chapter two, that leads you down the rabbit hole of Cavallari’s youth living in the impoverished ghettos of the American trailer park.

The story weaves the tale of Angie’s life as her parents uproot her family from the frigid Chicago winters and into the steamy swamp of central Florida.  After intense pressure from her Grandmother, Angie’s parents decide to purchase the Pelican Mobile Home Park, situated near the dilapidated remnants of the Godfather’s Lounge, a local watering hole for the downtrodden.   The tale is told through chapter-length vignettes, each more captivating than the last.  The cast of neighborly characters often feel so perfectly imperfect, they must be a figment of Cavallari’s imagination, rather than taken from her actual youth.  Her storytelling and descriptions transport you right into the story.

Cavallari’s life was difficult, with a narcissistic, bully of a mother and a childhood that was filled more with taking care of the trailer park than playing with children her own age.   She details her struggle with her weight when she was young and how it severely affected her psyche, all the while spinning it with a comedic undertone that leaves you shaking your head in wonder and fascination.

I enjoyed the liberal peppering of eighties pop culture nostalgia, as well as the musical references found throughout.  It was fun remembering my own youth during that same time frame and connecting with much of Angie’s childhood, even though I grew up in suburban western New York.

Check out this tale featuring the underbelly of Americana that is often joked about, but rarely detailed with such an intense magnifying glass. Remember to put on your seatbelt, because it’s going to be a bumpy ride.

Angie Cavallari is an assiduous writer who has been hammering away at the craft for over 20 years. She has authored thousands of blogs and articles with some of her work featured in Huffington Post, Healthline, The Reset, SF Bay Reader, among others. A transplant to a plethora of U.S cities including her current home, Denver, Angie grew up in Florida, then moved to NYC where she picked up her husband in a bar. In spite of her propensity for wanderlust, she managed to settle down long enough to have two extraordinary kids and build a solid life with her husband of 16 years.